As the old saying goes, “those who do not learn from the past are doomed to repeat it.” It should come as no surprise, then, that history is considered to be an interesting topic for many people—especially those who hope to become leaders in their respective
career fields. While there is no question that understanding one’s past is essential for success in life, staying up to date on current trends is also considered to be quite important. Blogging is a popular activity that has grown substantially in the last several years. Understanding not only the history of blogging, but also where experts believe that it may go, is crucial for those who are interested in participating in this intriguing pastime.

Where it All Began

While most individuals today consider blogging to be a relatively recent trend, history suggests that the activity has actually been around for quite some time. In fact, while currently-recognized blogs did not exist until the late 1990s, online communities have been widely available to tech-savvy individuals since the late 1980s. Usenet, Genie, and CompuServe were all commercial online community groups that allowed individuals from all parts of the world to create running conversations through the use of digital “threads.” Depending on the server in question, these blogging pre-cursers varied quite dramatically in their quality and context.

At the turn of the 21st century, many people began keeping an online diary, where they would record the events and activities of their daily life. While most of these diaries focused solely on written materials, certain sites, such as EyeTap, allowed individuals to post videos and pictures from their everyday routine as well. Eventually, these online diaries became embraced by certain corporations, where they were seen as a way to attract attention to new products, ideas, or activities. The entries created by individuals and businesses alike eventually became referred to as weblogs—or “blogs.”

Despite a relatively slow start, blogging became extremely popular in the mid 2000s—especially among celebrities and members of 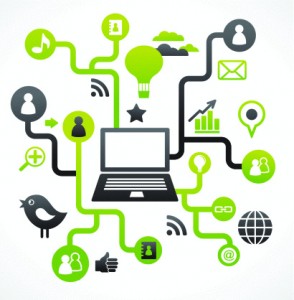 the media. Newspaper reporters and politicians saw blogs as a way to attract attention from a younger crowd that might not otherwise pay attention to politics and news. And, in fact, young populations appreciated the nearly instantaneous coverage provided by many blogs, a well as the personal commentary provided by the writers of said blogs. Instead of getting “just the facts,” readers could also obtain an opinion of the news story being read.

While blogs and the activity of blogging continue to be popular among politicians, celebrities, and members of the media, more and more common citizens have begun to develop their own blogs in the last few years. While some of these blogs continue to serve simply as an online diary of personal accounts, others function as electronic libraries, cookbooks, and even travel agencies. As the world continues to become more and more modernized, the ways in which blogs are used will likely increase as well. By staying up-to-date with changes in the field of blogging, citizens around the world can make a dramatic impact with their words and ideas.